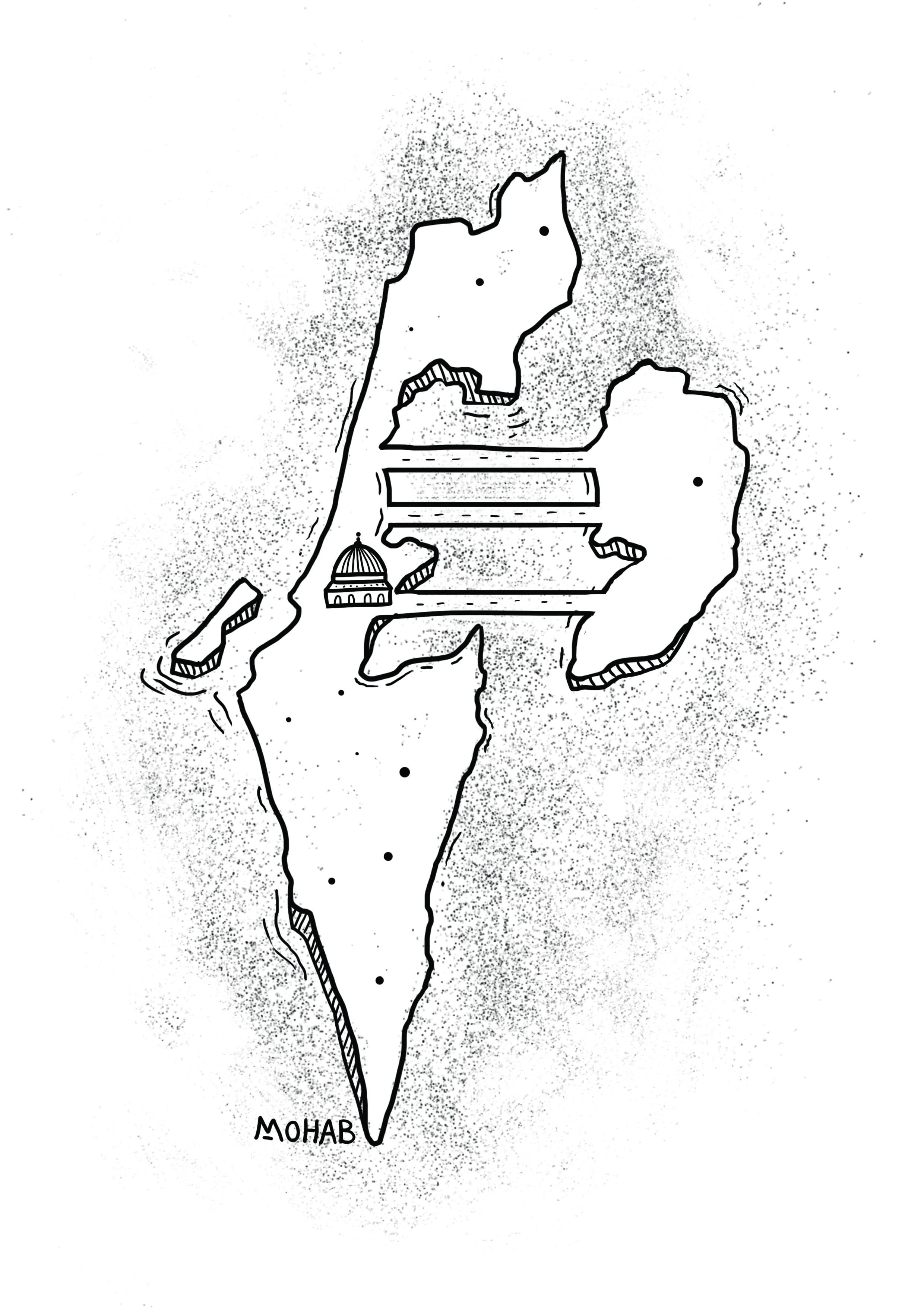 
This argument represents the necessary preliminary statement to focus on the current debate related to the viability of the two-state or a single state solution, analyzed through a gender-based perspective.

Taken cognizance of the need to consider alternative peaceful models to the Israeli Palestinian question2, above all the daily life of both populations has to be explored. In particular, the gender issue and the preservation of women rights assume an emblematic value in order to give voice to the oppression of Palestinian and Israeli women, even though victims on different levels and strengths. Especially since the beginning of the al-Aqsa Intifadah, the worsening of the conflict has dramatically deteriorated the human rights condition concerning the most vulnerable sectors of the society.

As an alternative interpretation key for the discussion on the one-state solution, the research paper is based on the hypothesis of the national-political impact on women as gendered beings. Jasmin Habib. This paper addresses some of the novel ways in which members of the Palestinian community have engaged and reclaimed history, employing the Internet to assert an autonomy denied the stability of geography and the continuity of land, as mourned by.

Edward Said in After the Last Sky. Neither entirely celebratory of community nor cynical about its contemporary ability to exercise autonomy, the paper presents arguments for appreciating how Palestinian transnational advocacy groups or what I call TAGs have used cyberactivism to enter history in ways that are populist as well as political, symbolic as well as strategic, interactive as well as fixed, though not entirely or necessarily dialogical.

My purpose is to argue that TAGs reinforce existing feelings of community in a Palestinian diaspora that is dispersed geographically. They give the community a means of expressing hope and of developing ways to continue living together as a community. They also take advantage of the capabilities of information and communication technologies to organize place-based politics and activism. This place-based politics is increasingly coordinated throughout the diaspora, a possibility that also tends to reinforce community.

TAGs reterritorialize a national community, strengthening dense social relationships across dispersed spaces by reclaiming history. This observation moves us away from political sociological treatments of TAGs, shifting the analysis from effect and resource mobilization toward process and praxis. This is the realm of autonomy, where communal identity is renegotiated. While the Palestinian struggle for the right of return plays itself out against a Zionist backdrop that continues to deny that excursion, TAGs suggest that another world is emerging despite the political regimes that are in place to silence its inheritors.

Zochrot and Palestine Remembered are two key sites for observing these creative productions, through which people within historically opposed communities reimagine their boundaries in the name of global justice. Jeff Halper. As in a Dr. A "Two-State Plus" solution, as I call it, this approach envisions a two-stage process in which self-determination is disconnected from economic viability. Less elegant than the others, more complex, more difficult to present in a soundbyte, it is also far more workable.

Like the European Union, it preserves a balance between national sovereignty and the freedom to live anywhere within the region.

Not only is a confederational approach just and sustainable, it offers a win-win solution as well. In contrast to the two-state solution which is limited in scope, technical in conception and unable to address many of the underlying issues of the conflict, the "two-stage" approach emphasizes processes -- of peace-making, trust-building, economic development, the establishment of strong civil societies, and reconciliation leading to a genuine resolution of the conflict.

Its outlines are straightforward and transparent. Recognizing that Palestinian demands for self-determination represent a fundamental element of the conflict, the first stage of the confederational approach provides for the establishment of a Palestinian state.

Statehood, however, does not address the crucial issue of viability. If it were only a state the Palestinians needed, they could have one tomorrow "the mini-state" offered by Barak and Sharon.

But the issue is not simply a Palestinian state. Their greatest fear is being locked into that state, into a Bantustan, into a prison-state that cannot possibly address the needs of their people, now or in the future.

The "two-stage" approach offers a way out of this trap, even if the Israeli presence is reduced but not significantly eliminated. The Palestinians might be induced to accept a semi-viable state on something less than the entire Occupied Territories with or without some territorial swaps on condition that the international community guarantees the emergence of a regional confederation within a reasonable period of time five to ten years.

So while the first stage, the establishment of a Palestinian state on most of the Occupied Territories including borders with Jordan, Syria and Egypt addresses the issue of self-determination, the second stage, a regional confederation, would address that of viability. It would give the Palestinians a regional "depth" in which to meet their long-term social and economic needs.

Following upon the emergence of a Palestinian state, the international community would broker a regional confederation, a loose economic association of Israel, Palestine, Jordan, Syria and Lebanon reminiscent of the European Community before it became a Union. Over time, Egypt and other countries of the region might join as well.

That breaks the Palestinians out of their prison. Rather than burdening the small emergent state with responsibilities it cannot possibly fulfill, the confederational approach extends that burden across the entire region. It also addresses the core of the refugee issue, which is individual choice. Palestinians residing within the confederation would have the choice of becoming citizens of the Palestinian state, retaining citizenship in their current countries of residence or leaving the region entirely for a new life abroad.

They could choose to return "home" to what is today Israel, but they would do so as Palestinian citizens or citizens of another member state. This addresses Israeli concerns about the integrity of their state. In such a confederation, even a major influx of Palestinian refugees into Israel would pose no problem.

It is not the presence of the refugees themselves that is threatening to Israel. After all, , foreign workers and an equal number of Russian Christians reside in Israel today. The threat to Israeli sovereignty comes from the possibility of refugees claiming Israeli citizenship. And since a confederational solution does not require the dismantlement of settlements - although they will be integrated - it is not dependent upon "ending the Occupation", the main obstacle to the two-state solution. It will simply neutralize it, rendering all the walls, checkpoints, by-pass roads and segregated cities irrelevant.

Jeff Handmaker. Efforts to bring about a just and sustainable peace between the State of Israel and the Palestinian people have failed because of two main reasons. First, these efforts have mostly been conducted outside the realm of international law and human rights, an approach that was insisted upon by the International Court of Justice in its historic Advisory Opinion of July Second, peacemakers have usually reduced their understanding of the situation to a "conflict", and very often a "religious" one, between two seemingly symmetric groups, ignoring the colonial underpinnings of this confrontation.

The relationship between both parties is, fundamentally, an impasse between conflicting national narratives. The Zionist-Israeli national narrative maintains Jews need exclusive protection in Israel and, for many, in the occupied Palestinian territories as well and are consequently entitled to dominate Palestinians in order to achieve this goal.

The Palestinian national narrative maintains an end to colonial domination, the return of confiscated lands and properties and full equality under the law and are consequently entitled to vigorously resist Israel's oppressive policies and its occupation and annexation of their lands and property. This paper discusses a way out of this impasse and building a single, secular democratic state based on respect for equal rights.

Specifically, by narrowing our analytical lens to the spatial focus of the West Bank and Gaza Strip, we can lose sight of broader regional processes that no less shape the reality of state formation in these areas. The central argument of this paper is that consideration of state formation must be embedded in an analysis of changes in the broader Middle East regional economy.

Following the signing of the Oslo Accords in , the Palestinian economy was tightly circumscribed by the system of movement restrictions that gave Israel control of the flows of commodities and labour power in and out of Palestinian areas.

Industrial zones are being established at the edges of these areas where Palestinian labour will operate as an adjunct to the Israeli economy while remaining geographically separate. These developments, however, are situated within a developing economic configuration premised upon deepening regional integration.

Contrary to dominant assumptions, these regional agreements severely circumscribe options for Palestinian statehood. The possibilities of either an independent Palestinian state or a democratic, unitary state are being undermined by these regional shifts. This paper concludes with recommendations for how the framework of a single state solution could be conceptualised within an alternative regional arrangement.

The main purpose of this paper is to assess the one and two state solution proposals in light of their strengths and weaknesses towards the implementation of the rights of both peoples in general, and particularly the rights of Palestinian refugees. The first section of the paper begins by mapping the rights of Palestinian refugees under various international legal treaties and mechanisms, including international humanitarian law, human rights law, the law of state succession and UN resolutions.

This is followed by an examination of the right to self determination of the Jewish people, often used as the counter-argument to Palestinian refugee rights, with a discussion of how apparently conflicting rights can be weighed under international law. The second section of the paper provides the historical and political context of these 'conflicting rights', from the initial mass expulsion of Palestinians in the war to the present day institutionalization of the Israeli apartheid regime. The third section of the paper is an evaluation of the one-state and two-state solution models in light of the discussion in the first two sections.

A two-state solution, however, does not negate Palestinian refugee rights; that even if two states were to be created on the land of mandate Palestine, the individual and collective rights of Palestinian refugees, and the Israeli and international obligation to ensure the implementation of these rights would remain unchanged.

Naeem Jeenah. Salim Vally. While the one-state vs two-state debate with regard to Palestine and Israel has waged in earnest since the partitioning of British Mandate Palestine into two entities by UN General Assembly Resolution , only recently have protagonists of the debate been adding substance to what both options might practically mean.

This paper aims to enhance the discussion on the substance. In particular, it will focus on the challenges to both options that will be posed by the national question. The "national question" has been debated for decades. In the context of the post-apartheid South African state and future Palestinian-Israeli statehood, the National Question focuses on issues such as: how the notion of "nation" is constructed, who is regarded as part of the "nation", what role ethnicity, class, language and religion play in defining the nation, the kind of recognition or protection different groups within the new "nation" might seek, and the possibility - in each context - of a unified or cohesive "nation".

The South African struggle against colonialism and apartheid aimed - even across ideologically divergent organisations - to create a new post-apartheid state that would be using the term used in the Palestinian-Israeli debate a "one-state solution", which would incorporate all the "homelands" and allow no autonomous or self-governing territory in any configuration for any group.